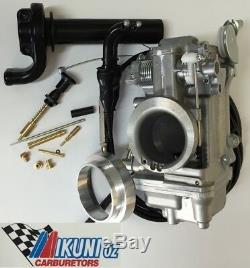 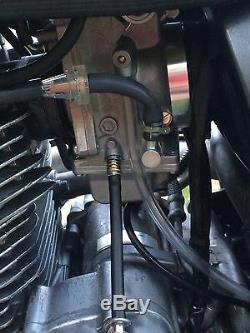 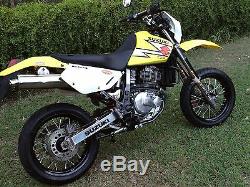 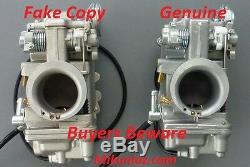 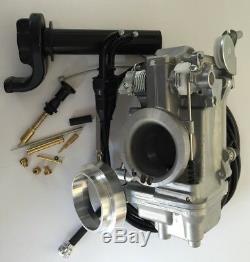 Genuine Mikuni TM42-6 (HSR 42). The Mikuni TM42-6 HSR flows 17CFM more than the TM40-6 and incorporates many upgraded features such as a roller-bearing slide. All this means going even faster has never been so easy, replace your stock carb and say goodbye to hard starting, hesitations and flatspots. These Mikuni carburetors are available as kits and easily fitted to Suzuki DR650, KLX 650 Kawasaki, KTM 640 and most Honda XR models using our range of silver anodized air-box adapters, throttle cables and 1/4 turn quick action throttle assemblies. All kits have the correct jets provided as well as spares for fine tuning. You will instantly experience better throttle response, improved acceleration, increased horsepower and torque. In a number of instances Dyno tests have shown improvements of up to and over 25% when fitted to OEM carburetored engines.

To clarify some commonly asked questions about this carb in regards to a comparison with the 40mm. Both of these are great carburetors and everyone is more than happy with the improvement delivered by either. The 40mm is a great carb but the 42mm is just a more finished version, understanding where they came from really makes it all clear. In the late 80s Mikuni American released the HS40 as an amazing new carburetor for the Harley Davidson market, literally knocking all its competitors off their perches.

I was at the San Jose Custom Chrome Show when it was released and become part of that buzz as a distributor. This slide type fuel metering device basically made the competitors butterfly type carbs seem like lawn sprinklers. With the huge increase in Harley Davidson sales this became a very lucrative market. Recognising the potential of this market and being aware of the efforts of competitors to try and grab back their share of it made Mikuni realise the necessity of replacing the 40 with a carburetor to be the be all and end all of all carburettors. The target was to deliver unrivalled peak performance combined with smoother throttle operation and lighter throttle pull by replacing the metal on metal slide action with a slide running on roller bearings and replacing the load bearing throttle shaft bush with a needle roller.

Also a larger fuel bowl capacity but most of all superior venturi design and fuel atomisation resulting in more precise mixture ratios to not only increased horsepower and torque but also to enable the fitment of a larger carb to smaller capacity engines without losing valuable bottom end power, where in fact instead gaining more. In 1994 the HSR42 was born and just like you will if you fit one to your bike, all we could say was WOW. Instant throttle response delivering 25% more horsepower and torque over the stock CV carb before even putting on a real high flow air-cleaner. As the badge says 20 years later Still the best performance carburetor on the planet. Unfortunately, the TM42 till now only had limited sales in the Japanese single market due to its physical size negating fitment to some of the more popular Hondas and thus only appealing to the custom fitter as there had never been a cable set or air-box adaptor available off the shelf.

Here in Australia Mikunioz realised someone had to take the plunge and build easily fitting kits, we finally designed and released these items for sale late in 2015. We do get some people asking if this carb will effect fuel consumption and the simple answer is it all depends on how having a lot more power and torque effects your riding habits.

If you can manage to back off and just have your bike perform at its present level you'll be pleased with the fuel economy, but of course when the same amount of twist that equated to average acceleration before, becomes front wheel lifting, breaking traction action, well its hard to not want to go and play. If you have more horses in the paddock and you want them all to perform, you have to feed them more hay! If you just ride it like you do now, only coming out of corners with the same level of acceleration and keeping your front wheel on the ground all the time, fuel economy will be much the same or even better. Generally, any extra consumption, even when going harder is often related to the pump nozzle which if concerning can be adjusted back without any huge performance difference.

THIS IS JUST PLAIN OLD COMMON SENSE. Please also note that international parcels HAVE to be signed for and all parcels whether domestic or international are fully insured.

THE FOLLOWING INFORMATION IS FINAL. THIS IS FINAL AND NO OTHER EXCEPTIONS! The item "Suzuki DR650 Mikuni Carburetor, TM42-6 42mm Flatslide Pumper Kit" is in sale since Sunday, September 10, 2017.