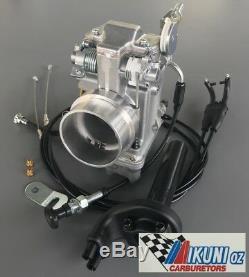 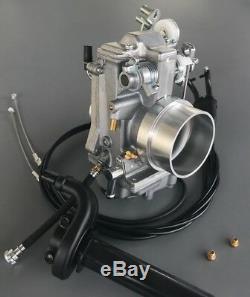 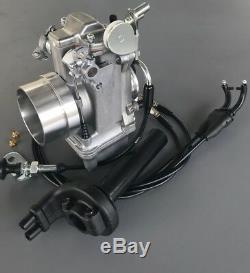 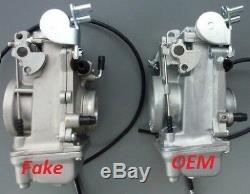 Genuine Mikuni TM42-6 (HSR 42) Carburetor fitted with cable choke for use with larger tanks. The Mikuni TM42-6 HSR flows 17CFM more than our TM40-6 and incorporates many upgraded features such as a roller-bearing slide. All this when compared to you stock carb means going even faster has never been so easy, say goodbye to hard starting, hesitations and flat spots. These Mikuni carburetors are correctly sized and easily fitted to your Honda XR600 and XR650L stock air box when using the silver anodized air-box adapter. For this Mikuni carburetor to operate correctly the motorcycles air box must be opened up as much as possible to allow more air flow in.

The kit also comes with throttle cables and a 1/4 turn quick action throttle which must be lubed before fitment. The carb comes with a couple of. Honda specific adjustments made and pre jetted for your engine. A specially made size 30 pump nozzle is fitted as the accelerator pump circuit will not work properly on Honda's or Kawasaki's without it. Climate, altitude and fuel density from different octane fuels all have varying effects on final fine tuning as does cam, exhaust and cylinder head porting etc. For this reason, we have included what we have found to be a range of jets to allow you to tune to most variables. This TM42-6 for Honda applications comes with a Cable choke and mounting bracket for accessibility when using larger tanks. We have listed an alternate kit which is fitted with a small pull out Knob choke for use when running smaller tanks. This carb fits with most aftermarket large capacity tanks being the Acerbis 22 litre tank or Safari & with the IMS tank which is very close. You must remove the inlet flange carb locator blocks with a box cutter to enable the carb to fully push home into the boot. The factory 650R Honda larger capacity tanks do not allow the fitment of this carb without modification. A competent person can easily heat and depress the contact area around the throttle mechanism allowing for clearance on problem tanks. Polyethylene tanks start their life as lump of poly that when melted evenly spreads itself around a rotating mold, to later carefully heat with a heat gun any section of a tank and change the shape has no effect on the integrity of the poly unless pushed too far thinning it. We recommend having this professionally done for the reason some people may neglect to properly remove all the fuel from an existing tank or if not competent may make a mess of it. You will instantly experience better throttle response, improved acceleration, increased horsepower and torque.

In a number of instances Dyno tests have shown improvements of up to and over 25% when fitted to OEM carburetored engines. To clarify some commonly asked questions about this carb in regards to a comparision with our TM40-6 40mm carb. Both of these are great carburetors and you will be more than happy with the improvement delivered by either.

The 42mm is just a little more finished version, delivering way more power and better fuel economy, understanding where they came from really makes it all clear. In the late 80s Mikuni American released the HS40 (TM40-6) as an amazing new carburetor for the Harley Davidson market, literally knocking all its competitors out of the park. We were at the San Jose Custom Chrome Show when it was released and become part of that buzz as a distributor. This slide type fuel metering device basically made the competitors butterfly type carbs seem like lawn sprinklers.

With the huge increase in Harley Davidson sales this became a very lucrative market. Recognising the potential of this market and being aware of the efforts of competitors to try and grab back their share of it made Mikuni realise the necessity of replacing the 40 with a carburetor to be the be all and end all of all carburettors. The target was to deliver unrivalled peak performance combined with smoother throttle operation and lighter throttle pull by replacing the metal on metal slide action with a slide running on roller bearings. Also a larger fuel bowl capacity was provided but most of all, superior venturi design and fuel atomisation resulting in more precise mixture ratios to not only increased horsepower and torque but also to enable the fitment of a larger carb to smaller capacity engines without losing valuable bottom end power, where in fact instead gaining more. In 1994 the HSR42 was born and just like you will if you fit one to your bike, all we could say was WOW.

Instant throttle response delivering 25% more horsepower and torque over the stock CV carb before even putting on a real high flow air-cleaner. As the badge says 20 years later Still the best performance carburetor on the planet. Unfortunately, the TM42 only had limited sales in the Japanese single market due to it only appealing to the custom fitter as there had never been a cable set or air-box adaptor available off the shelf. With the slowing of the Harley market due to fuel injection on new bikes, here in Australia, Mikunioz realised the opportunity to offer Mikuni's best Carburetor to the big Jap single market and in late 2015 we released a range of ready to roar direct fit up kits with correct jetting and a few trick mods to make them work better than anything before on big Jap Thumpers. The fuel consumption is way less but when comparing with the stock carbs, it all depends on how having a lot more power and torque effects your riding habits.

If you can manage to back off and just have your bike perform at its present level youll be surprised by the fuel economy, but of course when the same amount of throttle twist becomes front wheel lifting, breaking traction action, well its hard to not want to go and play. If you have more horses in the paddock and you want them all to perform, you have to feed them more hay! You will enjoy this new carb but do be sure to hold on tight on your first test ride as she may try to spit you off if you nail it to hard. We have express options available for all our products also. Townsville to Brisbane 3 days, Townsville to North/Just South and West is usually 1-2 days.

Please also note that international parcels HAVE to be signed for and all parcels whether domestic or international are fully insured. THE FOLLOWING INFORMATION IS FINAL. THIS IS FINAL AND NO OTHER EXCEPTIONS! The item "Honda XR600 XR650L Mikuni Carburetor, TM42-6 42mm Flatslide Pumper Cable Choke" is in sale since Wednesday, October 18, 2017. This item is in the category "Vehicle Parts & Accessories\Motorcycle Parts\Air Intake & Fuel Delivery\Carburettors & Parts". The seller is "mikunioz" and is located in Townsville, Queensland. This item can be shipped worldwide.